How to Make a Minecraft Server on Linux?

Setting Up a Minecraft Server on Ubuntu

Firstly, we’ll create a Minecraft server using a VPS running on Ubuntu 16.04. The whole process can be broken down to three simple steps.

Before you begin, you need to connect to your server via SSH. To login to your server, open up the terminal (or use Putty SSH Terminal if you are on Windows) and type in the following command:

If you get a message which says Java was not found on your system, you can continue following the rest of these instructions. Otherwise, you are done with this section and can move on to step 2.

Run the following command in your terminal to download the latest packages of software installed on your system, including Java:

Now you need to install Java. We are installing Java 17 for this tutorial:

Just in case you want the latest version of Java, you can run the following instead of the above command:

Here we should also install screen, which will ensure that your server keeps running in the background even if you drop the connection. To do this, type in the following and execute:

You should now have Java and Screen installed on your system.

With the pre-requisites out of the way, we can now focus on installing the Minecraft server on Ubuntu VPS. It is always better to keep things clean and tidy. To avoid making a mess, create a new directory which will hold all your Minecraft files in one location. This step is optional, though for the sake of your sanity, we highly recommend it. To make a new directory, run this:

Once created, move inside the newly created directory by typing the following:

Next, you need to have wget on your system. If you don’t already have it installed, simply execute the following command:

Get screen up and running, so that the server can run in the background:

We’ve named the current session ‘Minecraft server 1’, but you can use any other name instead.

And that’s it – you have successfully installed your custom Minecraft server on Ubuntu.

Now you only need to run the installed server. To achieve this, run the following in the terminal:

As you can see, Minecraft requires you to have 1024MB or 1GB of RAM available to boot up the server. While this is the minimum requirement, we recommend having more RAM on board for better performance. To allocate more memory to the server, simply replace 1024 in the -Xmx and -Xms parameters with 2048 (2GB) and so on. Here’s what you should see after executing the command: 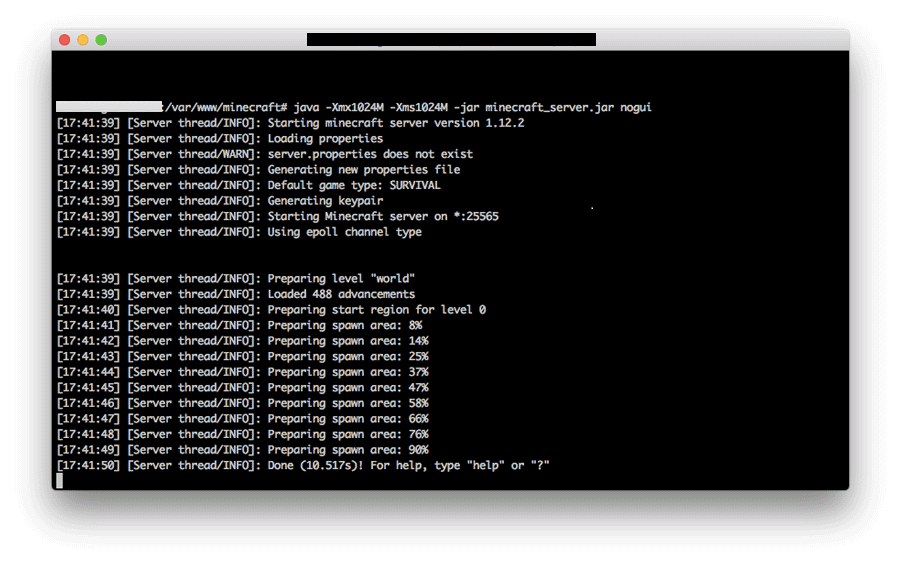 And there you have it: your very own Minecraft server setup in merely minutes. The server is running in the background, as per our use of screen. To opt out of screen, press CTRL + A, then D. You can undo this and re-open screen’s window by typing screen -r in the terminal. Finally, you can fiddle around with your server’s settings through the server properties file:

Setting Up a Minecraft Server on CentOS 7

Let’s see how to make a Minecraft server on a VPS running CentOS 7. The process is slightly different compared to Ubuntu.

Firstly, you will have to install Java as Minecraft is built purely on it. Next package will be Screen, it is required for the Minecraft server to work once the SSH session ends. Connect to your VPS server via SSH (Windows users can use Putty SSH client for this) and run this command to install both packages:

In order to organize the installation, you should create a dedicated directory for Minecraft by running this command:

Then just change the working directory to the one that you have just created:

Start the Screen with adequate name:

Accept EULA agreement by changing the value from false to true in eula.txt file. Use this command to edit the file:

Finally, you can run the server using this command:

The Minecraft server has been successfully started, you can exit the Screen using CTRL-A + D keyboard shortcut.

Settings of the server can be changed by editing the options file:

How to Make a Minecraft Server on Windows?

How to Make a Minecraft Server on Mac?