There are tons of monitoring tools that are used for keeping an eye on systems performance and sending notification in case something goes incorrect. However, the installation and configuration steps included are often tedious.

An open-source real-time monitoring & troubleshooting tool is Netdata which only wants a few steps to get installed. The Git repository comes with an automated script that manages the bulk of the installation and configuration process and takes away the cumbersome configuration associated with other monitoring tools.

Netdata has become hugely popular since its initial release in October 2013. It collects real-time metrics such as CPU and RAM usage, bandwidth statistics, and disk utilization and presents them on easy-to-interpret charts/graphs.

It has made giant leaps and bounds, and this has gained it a place in Forbes 2020 Cloud 100 rising stars. This list constitutes the top 100 private cloud companies.

In this article, you will see how can install Netdata on CentOS 8/7 to manage real-time, performance, and health monitoring of servers and applications.

How to Install Netdata in CentOS Linux

1. Before you jump into the installation of Netdata, a few essential packages are compulsory. But first, update the system and install the EPEL repository as shown.

2. Next, install the requisite software packages as shown.

3. Once you are through with installing the required packages, clone the Netdata git repository as shown.

4. Next, navigate into the Netdata directory and perform the install-required-packages.sh script. The script identifies your Linux distribution and installs additional packages that are required during the installation of Netdata.

5. Finally, to install Netdata, run the Netdata automated script as shown below.

In execution of the script, you will be briefed on where crucial Netdata files will be stored. These involve such as configuration files, web files, plugins, database files and log files to mention just a few. 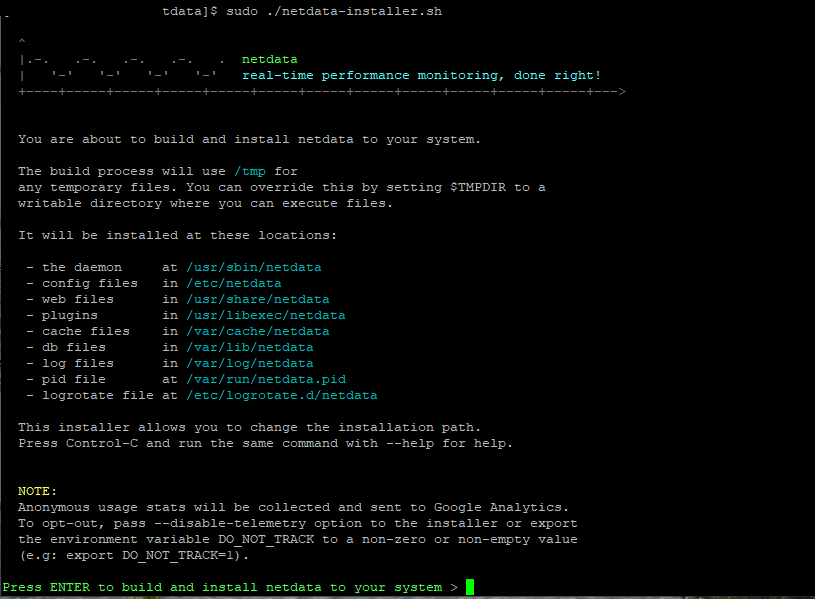 The script works for quite a while performing all the required configurations and tweaks during the installation process. For my case, it took about 3-5 minutes, and once done, the output displayed should be a confirmation that the installation was successful.

8. By default, Netdata listens on port 19999, and you can confirm this using the netstat command as shown:

9. You require to open this port on the firewall to have access to Netdata via a browser. Therefore run the commands below:

10. To access Netdata, fire up your browser, and browse the URL as shown:

You will get a dashboard displayed, giving you the overall system performance on intuitive and cool graphs. 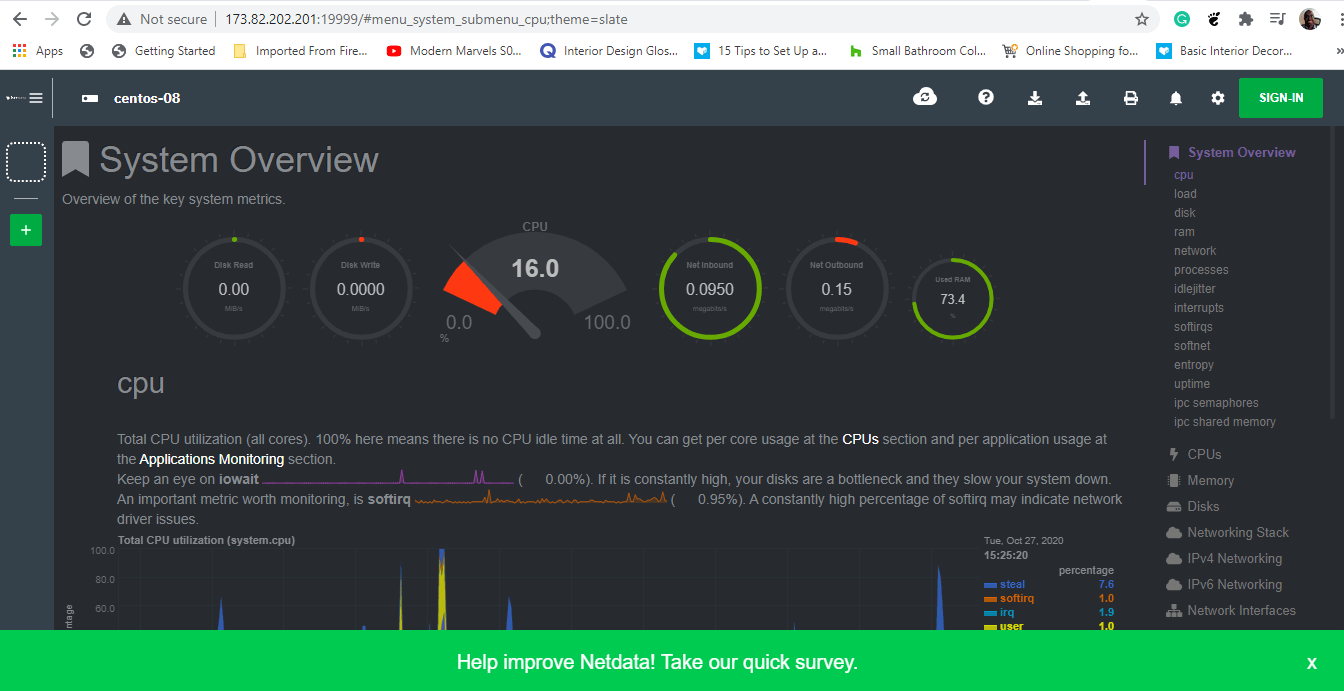 Feel free to have a look at different graphs by clicking on the metrics listed on the right sidebar. For example, to have a glimpse of the systemd services running, click on the ‘systemd services’ option as shown. 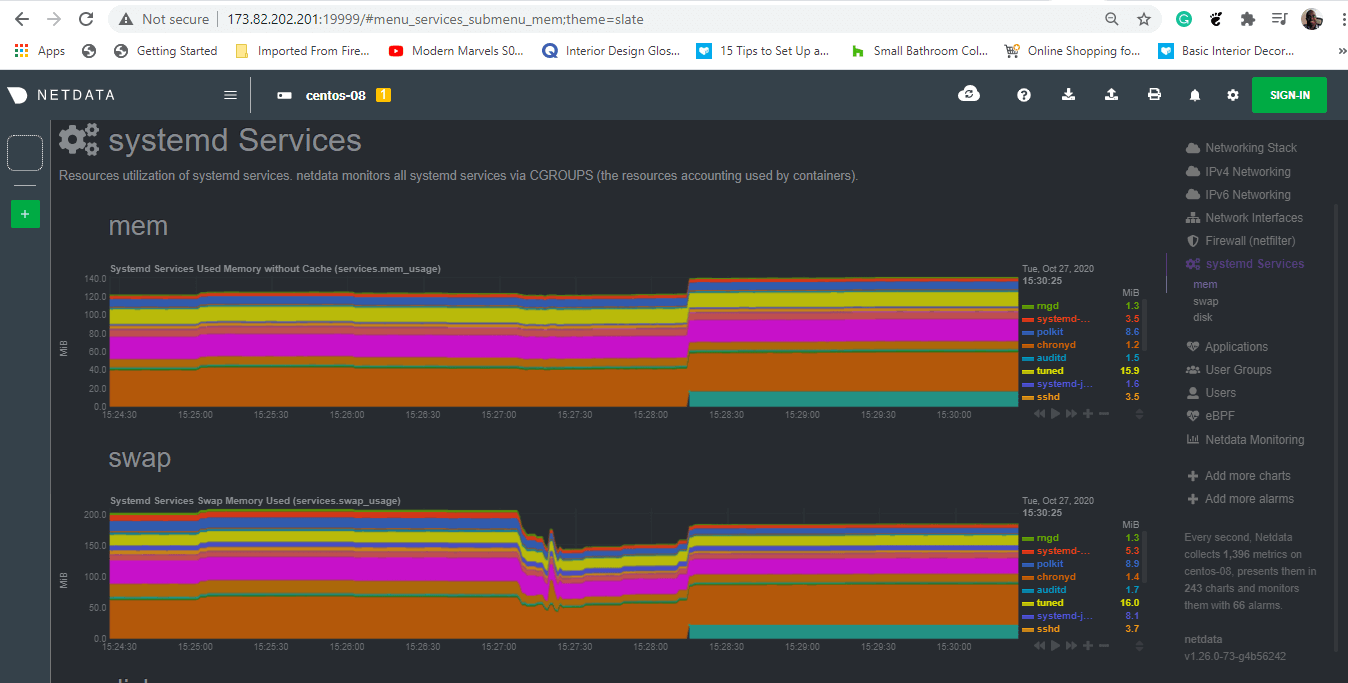 As you might alarmingly have observed, there’s no form of authentication given by Netdata. This implies that virtually anyone can access the dashboard provided they get a hold of Netdata’s IP address.

With Nginx installed, we are going to create a configuration file inside the /etc/nginx/conf.d directory. However, feel free to use the sites-available directory if you are using Nginx for other goals aside from Netdata.

Add the following entire configuration and make sure to adjust the server_ip and example.com directives with your server IP address and server name.

For user authentication, we will generate a username and password for a user ,using the htpasswd tool and save the credentials under the netdata-access file.

Next, restart the Nginx web server for the changes to come into effect.

Thereafter, you will get access to the Netdata dashboard.

And that’s it, folks. We have walked you through the installation of the Netdata Monitoring tool on CentOS 8 and configured basic authentication to secure the monitoring tool.

How to install the Sentora Web Hosting Control Panel on Centos/Ubuntu?

Sentora is a completely free web hosting control panel for Linux, UNIX and BSD based servers...

How To Install Webmin on CentOS 7

Webmin is a web-based interface for system administration for Linux-based servers. Step 1: Login...

How to install Drupal with PHP 7 on CentOS 7?

Drupal is a free and open source content management framework written in PHP and distributed...

Laravel is a powerful MVC-PHP framework, designed for developers who need a simple and elegant...

How to Install GitLab on CentOS 7