How to Find Out What Version of Linux You Are Running?

There are several ways of knowing the version of Linux you are running on your machine as well as your distribution name and kernel version plus some extra information that you may probably want to have in mind or at your fingertips.

Therefore, in this simple yet important guide for new Linux users, I will show you how to do just that. Doing this may seem to be a relatively easy task, however, having a good knowledge of your system is always a recommended practice for a good number of reasons including installing and running the appropriate packages for your Linux version, for easy reporting of bugs coupled with many more.

We will use uname command, which is used to print your Linux system information such as kernel version and release name, network hostname, machine hardware name, processor architecture, hardware platform and the operating system.

To find out which version of Linux kernel you are running, type:

You can also use -a option with uname command to print all system information as shown:

Next, we will use /proc file system, that stores information about processes and other system information, it’s mapped to /proc and mounted at boot time.

Simply type the command below to display some of your system information including the Linux kernel version: 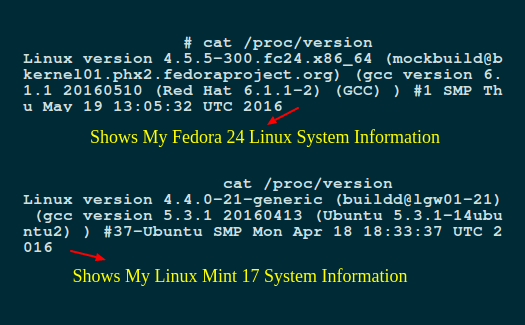 From the image above, you have the following information:

The best way to determine a Linux distribution name and release version information is using  cat /etc/os-release command, which works on almost all Linux system.